Charles “Charlie” Ware, artist, pianist, mystic and self described “rustic” died in San Francisco in September of 2005. He lived his life in complete devotion to his art, at least once he recovered from a long bout of drinking – all else be damned.

A great story teller, Charlie was a man who defined his world through his life’s story. In World War II he was in Paris before most U.S. troops reached the city. The soldiers were on orders not to enter the city but Charlie needed a drink so he got into the city and found a bar. As a medical orderly during the war he did not see front line action but once a sergeant just back from the front came demanding replacements for his unit. He turned on Charlie and said “You there, come with me!” Charlie looked around then ran like hell. Later, when his unit was occupying Innsbruck, Austria, he painted a mural in the mess hall using house paints and kerosene.

Upon returning from the war, he found his father had sold his farmland in Santa Rosa, California. The idyllic youth on the farm was gone and Charlie returned to the California School of Fine Arts, (now the Art Institute,) but he didn’t last long. Before the war he had been a star student winning a prestigious award for draftsmanship, but after the war the school had changed and Charlie didn’t take to the new environment.

He left school and worked as a sign painter, while living in bars in North Beach, paying for drinks with paintings of barroom nudes and patron portraits. He rode the rails in the Southwest, being chased out of towns by local sheriffs. He ended up in New York for a stint, painting signs, living in flophouse hotels, all the while making his art with a style his own, divorced entirely from the currents of the day. 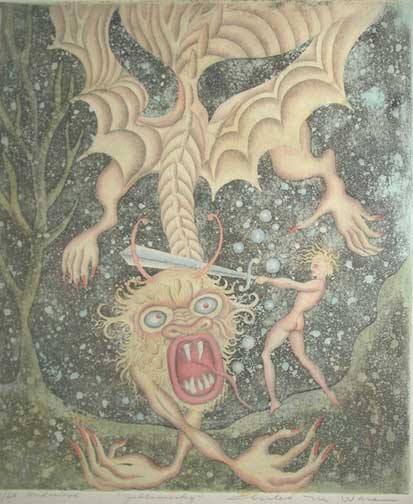 In the late 1950s Charlie had a vision – certainly it was partially the effects of detox, but a vision nonetheless – of the spiritual realm that clung to him throughout his life. It was this vision that he sought relentlessly to portray in his art. After returning to San Francisco in the late 1950s he gave up drink, married his second wife Linda, and had two children. He taught himself printmaking techniques and bought a press. He soaked his paper in the bathtub and used an acid bath up on the roof to etch.

Charlie worked on his art constantly and produced a huge amount of work. He was also constantly inventing techniques and applications. He mistrusted all authority and taught himself everything. He never gave up this love of invention. In recent years he often experimented with spray paint and stencils. He made prints using cardboard by removing layers and incising lines and inking it intaglio and relief. He made prints using an electric dremel, or with latex paint on tin plates, or with inked cutouts. He collaged, drew, painted, sprayed, etched and mixed it all up, all in pursuit of his vision of the spiritual realm. He didn’t draw distinctions between the media he worked in. His approach was fully anarchic when it came to the hierarchy of media. He smashed any barriers he found there. And all along the way his subject remained fixed.

He often looked to literature for his spiritual companions as represented in fantasy and science fiction writers. A particular obsession of his was the writings of Lewis Carroll. In Charlie’s world the spiritual vision of Carroll mixed with the Elysian fields of ancient Greece and the vision of afterlife in the New Testament. He created a spiritual realm out of such disparate elements, the sweetness of Carroll and the darker visions of barroom demons and Christ crucified. Several works by Charlie sought to unify these elements: Christ portrayed in the world of Alice at the tea party on the lawn, as in “The Last Tea Party”, Alice as witness to the Crucifixion, as in “Curiouser and Curiouser”. It was a strange mixture that produced in the viewer a reevaluation of what constitutes the spiritual realm.

Charles Ware was associated with several galleries in the Bay Area including the Vorpal Gallery, and Will Stone Gallery. He saw the life of an artist as a avocation and felt disassociated from the commercial and popular trends of the day. Calling himself a rustic living in the wilds of Bernal Heights, (a hilltop district in San Francisco) Charlie exemplified the life of dedication to art. He once said to be an artist you have to be a bum. Charlie was a bum. In all the saintly visions of nirvana there is such a bum. A bum that would befit a Zen monk or a beat poet or a screaming drunk with a vision of eternity, or an inspired painter, or a true authentic human being. It was as a result of his bumliness that he was an artist.

A natural outsider he nonetheless joined the California Society of Printmakers in the early 1990s. The CSP gave Charlie a needed boost and lots of new friends. Charlie was always supportive of the artists he knew. He talked them up to everyone he met and in turn he was supported by them. Charlie was a curmudgeon, a crank, a genius, a misfit, a poet of the imagination and an artist whose dedication to his craft and to his family and friends made him a wonder to know.

He is survived by his two children Gabriel and Laura and his wife Linda.